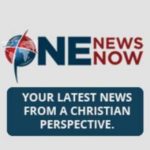 He Loved Muslims Because He Loved Jesus. The Bible Showed Him How. Holy Spirit Told Me, ‘Get Out of the Theological Box if You Want to Grow’

A Bible verse of the day and a nature photo of the day, plus a Christian nature and creation blog designed to inspire and to encourage people in their walk with God. God's Path of Life"